How To Know Which Publishing Path Is Right For You 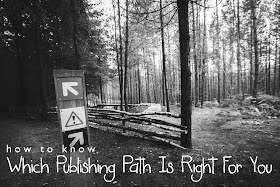 Lately I've gotten into a bunch of different conversations with downhearted aspiring authors in which said author tells me dejectedly, "I just don't feel like I'm ever going to get an agent. And I don't deal well with rejections. I'm thinking of just putting my book on Amazon to see what happens."

And I get that. I totally do. Guess what? I gave up on my first query attempt after a whopping ten queries. The rejections were just soul-killing, and it was apparent very quickly from talking to industry professionals that that book never had a fighting chance, anyway. And while I queried my second book much more widely, after more than 100 rejections on that book, I came perilously close to quitting writing—forever.

I am going to venture a sweeping guess that there isn't a single published author out there, no matter how successful, who doesn't understand the toll waiting and rejection can take on a new writer's soul. Remember how J. K. Rowling got twelve publisher rejections (after she was already agented) before Harry Potter sold, and even then it basically sold because the daughter of a publisher liked it? No author achieves success unscarred.

For many authors, indie publishing is absolutely the right way to go. I have many friends who are happy, successful, fulfilled indie authors. I have indie author friends who are hitting lists, achieving bestseller status, earning indie industry awards. They love the way that they're publishing, and I'm so happy for them. But—and here's the big caveat—none of these authors just put a digital file on Amazon and walked away. All of these authors studied, invested in, and excelled at the skills needed to be a successful indie author. They knew that their genres sold well in their chosen format. They knew the tricks to use to build a readership base. And they also, by and large, write very quickly and are able to put out several books a year, something that can be crucial to an indie author's success.

What Are Your Goals?

When I'm counseling friends who aren't sure what kind of career they'd like to have, my first question is always this one. What are your goals? If you think about where you want your career to be in ten years, what do you see? What are the things that spell successful author to you?

By and large, your author goals will dictate your publishing path.

—If you harbor a deep dream of being able to walk into Barnes and Noble or your local indie and see your book on the shelf—that's not typically something you can get as an indie author (although there are definitely exceptions, particularly when it comes to local bookstores who know you as a local author).

—If you dream of starred reviews and mainstream award nominations, a traditional publishing path is a must. While indie markets have their own awards (like the Rone), and you will still be eligible for location- or affiliation-based awards (for example—if you're a Mormon author, as I am, you're eligible to be nominated for a yearly Whitney award whether you're trad or indie), the shiny stickers that most readers are familiar with (such as the National Book Award, the Pulitzer Prize, the Newbery and Printz Medals, etc.) are only awarded to traditionally published authors.

—If you want to have the largest degree of creative control, traditional publishing is probably not where you'll be happiest. In trad publishing, things like cover design, your book's description, and many of the finer points of editing are things you'll be involved in but not have final say over. Indie authors, on the other hand, have full control over all aspects of the publishing process, from layout to marketing plan.

—If you're an entrepreneurial sort and love the idea of building your author career like a business, you'll love being an indie author.

—If you want to turn out a lot of books each year and not have to wait for contracts to expire or the excruciatingly slow pace of traditional publishing, indie authorship is a perfect fit.

—If you don't want to have to worry too much about the extraneous details of your career—like cover design—and if you want support in marketing your book without having to hire a private publicist, then being a traditional author is probably your best bet.

—If you want to write for readers younger than 14, it will be much harder to achieve success as an indie. For middle grade readers and younger, reading is often still driven by "gatekeepers"—teachers, librarians, booksellers, and parents. Many kids in this category still don't have smartphones or e-readers, they don't have unfettered access to transportation, and their parents often still want to screen their reading for objectionable content.

—If, on the other hand, you want to write something like adult romance? There's a huge and booming market for indie books and you'll likely do quite well.

—The most financially successful indie authors achieve success by honing in on a limited "brand" and putting out one or more books a year that fit that brand. If you're a jack-of-all-genres who likes to move between age categories and topics, you might have a more difficult time establishing yourself as an indie author. While traditional publishing often still expects you to follow your debut novel up with another in that genre, you typically have a little more flexibility and less pressure to put books out as quickly.

Obviously, there are exceptions to every "rule" on this list. Traditional authors still have to be heavily involved in their own marketing, and some indie authors achieve great success writing slowly or hopping from genre to genre. Many authors ("hybrid" authors) do both quite successfully—writing for traditional publishers and then pursuing novellas or other genres independently on the side.

This post is not intended to either dissuade people from pursuing indie publishing or imply that it's less worthy than traditional publishing. Both paths, however, take work, perseverance, and the ability to handle a good amount of rejection. And neither path will make you happy as a writer if it won't help you achieve your ultimate goals.

So next time you're feeling discouraged, get out a sheet of paper and jot down a list of your writer goals!
cindy baldwin at 2:15 PM
Share